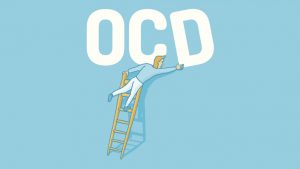 Obsessive compulsive disorder (OCD) is a serious, chronic, and long-lasting syndrome in which an individual has uncontrollable, repetitive thoughts (obsessions) and habits (compulsions) that he or she feels the strong need to do repeatedly.

Some people with OCD tend to ignore or suppress the obsession but despite the efforts to get rid of bothersome thoughts or urges, they keep coming back. Instead of easing the stress and anxiety caused by OCD, it drives people to perform more compulsive acts, leading to a vicious cycle of OCD.

Many people who have obsessive compulsive disorder are fully aware that their thoughts and habits don’t make sense. People with OCD don’t do compulsive actions because they enjoy them. They do them because they can’t quit, which truly unsettles their life and interferes with work and social life. And even if they stop, people often feel so bad that compulsive acts come back to them again.

OCD is a common disorder that affects adults, adolescents, and children all over the world. The exact causes of OCD are unknown, but factors include:

What are the main types of obsessive compulsive disorder?

For some individuals who have experienced OCD issues around germs, infections, cleanliness, the idea of working in a shared office, or visiting public areas, or even taking children to school, with so many germs around becomes fearful and distressing. Therefore, it is easier to stay at home, in a sanitised environment. For some people, the pandemic will have contributed towards this category of OCD.

Other protective rituals include:

Some people who have OCD fall into overwhelming preoccupation to make everything orderly. They can spend an inordinate amount of time moving, counting, and arranging things to ease their distress. Oftentimes, they also have specific superstitions about numbers, patterns, and symmetry.

Some of the common behaviours include:

A person with this dimension suffers from obsessional thoughts that in essence are repetitive, disturbing, often horrific, and abominable in nature. For example, thoughts of inflicting violent or sexual harm to loved ones significantly harm one’s morals and values.

Some of the themes and rituals associated with this dimension include:

The intrusive thoughts are repetitive and not voluntarily produced, they can cause the sufferer extreme distress – the very idea that they can have such thoughts in the first place can be disabling.

People with the dimension of checking and rechecking tend to experience intrusive thoughts and fear of not being in control at that moment in time. Some people may be concerned with unintentionally harming themselves or someone else due to their own carelessness or negligence.

A common example is checking things like door locks, car doors, stove knobs, window locks, light switches, gas heaters etc. Checking may also include the asymmetrical component of checking a specific number of times and if the initial ritual does not bring about relief then the whole ritual can be repeated!

OCD is an anxiety disorder and can be very much exacerbated by any addiction disorder.  Addressing an addiction could in itself inadvertently reduce obsessive compulsive disorder patterns of thinking and behaviour. Your typical addict has very disordered thinking and has the ability to create or enhance pre-existing physical and psychological rituals that may seem excessive in nature but can actually assist a client in coping with the extreme changes that come with shifting from active addiction to a drug free life! More extreme cases who are regularly negatively impacted could respond well to medication from Twin Rivers doctor or psychiatrist.

David is the Clinical Director of Twin Rivers Rehab and a certified Drug & Alcohol Counsellor with IC&RC-UK-EUROPE and a Level 6 Professional Addiction Counsellor with BAPSA. Articles and blogs are compiled with the assistance of researchers and addiction/mental health specialists.